Showing posts from May, 2013
Show all

- May 13, 2013
Have you ever been thirsty, really thirsty?  The desires in our souls are often compared to thirst.  When you are thirsty, the desire for water can override everything else. We pursue money, sex, entertainment and a thousand other desires like our lives depend on it. Driven by an overpowering thirst, our lives are poured out in a passionate pursuit. God saw this happening with the ancient people of Israel and said:  “My people have done two evil things: They have abandoned me— the fountain of living water. And they have dug for themselves cracked cisterns that can hold no water at all!” (Jeremiah 2:13, NLT) Here in this passage God is using a metaphor.  He is comparing the thirst of the soul to the thirst for water.  Our souls hunger and thirst for God.  Without God we are parched and thirsty on the inside.  God says here that He is the fountain of living water.  There are two evil things God addresses.  The first is that His people have abandoned Him
Post a Comment
Read more 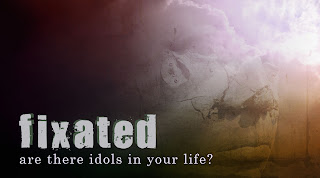 Fixated or Fixation: the state in which an individual becomes obsessed with an attachment to another human, an animal, or an inanimate object. (Wikipedia) Acquire an obsessive attachment to: (Webster)  What does it mean to be human? The scientific community has given us the Latin name: Homo sapiens: according to Wiktionary this is from Latin homo (“human being, man”) + sapiens (“wise, sensible, judicious”) We consider ourselves wise, sensible and judicious. And yet, Idolatry is part of the human condition. It is as old as humanity itself. Did you have to study Greek mythology? I suppose we all did. It is part of our culture. The days of the week are named after these deities. Tuesday – Mars the god of war; Wednesday – Mercury the god of commerce; Friday – Venus the god of love and beauty. When we think of idolatry, we think of statues and objects. However, consider what the gods we just listed represented. They represent things that even now men and women devote their liv
Post a Comment
Read more
More posts