This Moses and This Aaron

At the beginning of the book of Exodus, we reviewed the members of Jacob’s family that moved to Egypt.

They moved to Egypt because of widespread famine. Years before anyone knew the famine was coming, God sent Joseph to Egypt ahead of his family to prepare the way. This sounds nice, but in reality, it was a horrible ordeal. Joseph’s brothers hated him and sold him as a slave. Joseph spent years as a slave and then as a prisoner. As harsh as life was for Joseph, God was preparing him to fulfill a great role.

Let’s review where Joseph was in the family. 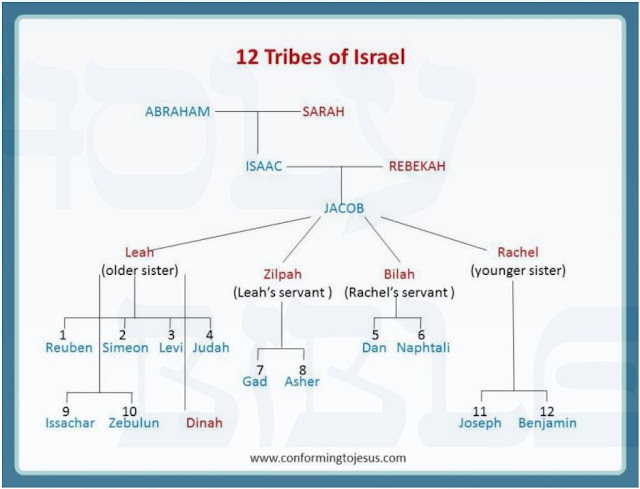 Joseph was number eleven out of 12. This simple statement misses the fact that he was his father’s favorite and was treated like a prince while his brothers were treated like hired hands. This family situation contributed to the malice of brothers who sold their younger sibling into slavery.

With the family safely in Egypt, years passed and that generation passed away. A time came when the king of Egypt no longer knew about Joseph, and instead feared the Israelites because of their great numbers and growth. This fear became the start of long years of slavery for the Israelites.

At this point in the story of deliverance, God takes the time to tell us who Moses and Aaron are. He does not list their achievements, their test scores, their qualifications, or their aptitudes. He lists their genealogy.

The first thing I notice about Biblical genealogies is that I cannot pronounce many of the names. The second thing is that I do not know who many of these people are. Exodus 6:14-25 seems to be just such a list.

Rather than reading a bunch of names without meaning or context, let’s consider who some of these people were.

Why was it important for us to know Moses and Aaron’s genealogy? I hope to be able to answer this question after we have considered some of the people in the genealogy.

If drawn out as a family tree, the genealogy looks like this.

Israel was the son of Isaac, who was the son of Abraham. Israel was named Jacob at birth, but God changed his name later in life. The family tree represented here starts with Israel and his first three sons.

Ruben had four sons. Each son was the head of a family group. Simeon had six sons, and Levi had three sons. The genealogy stops here with the sons of Israel because we are interested in the lineage of Moses and Aaron, and Levi is their forefather.

Studying the life of Jacob will quickly lead one to the conclusion that this family was messed up. We have already mentioned that Joseph’s brothers sold him into slavery. They led their father to believe that a wild animal had killed Joseph. All the brothers except Benjamin were in on this deception.

In addition to their corporate sin, the brothers had their individual sins.

Genesis 35:22 tells us:
While Israel lived in that land, Reuben went and lay with Bilhah his father's concubine. And Israel heard of it. Now the sons of Jacob were twelve. (Genesis 35:22 ESV)

Bilhah was Rachel’s servant, Reuben’s father’s concubine. Because of this act, Reuben lost the right of the firstborn.

In Genesis 34, we learn:
On the third day, when they were sore, two of the sons of Jacob, Simeon and Levi, Dinah's brothers, took their swords and came against the city while it felt secure and killed all the males. They killed Hamor and his son Shechem with the sword and took Dinah out of Shechem's house and went away. The sons of Jacob came upon the slain and plundered the city, because they had defiled their sister. They took their flocks, and their herds, their donkeys, and whatever was in the city and in the field. All their wealth, all their little ones and their wives, all that was in the houses, they captured and plundered. (Genesis 34:25-29 ESV)

Simeon and Levi killed everyone in a city because of one man’s offense.

Simeon had a child by a Canaanite woman, and Moses’ father married his own aunt.

Later in the story of Moses’ life, we learn that his cousin Korah led a rebellion against Moses.

This is a look at the surface of Moses and Aaron’s family tree. A more in-depth look would reveal even more flaws and sins. So, why is it important that we know that it was “this” Moses and Aaron?

First, it was important that Israel knew that Moses and Aaron were Israelites. Then no one could say, “You have no part with us.”

Second, it was important that we understand that Moses and Aaron were just ordinary people.

Let’s consider the importance of knowing that Moses and Aaron were Israelites.

They would have been subject to the same oppression and slavery as all the rest of Israel, allowing them to identify fully with the suffering and brutality of their situation. They also would share in the promises made to Abraham, Isaac and Jacob, promises that included the land of Canaan.

We will come back and consider why it is important to know that Moses and Aaron were just normal men, but first I want to show you some parallels in this story of deliverance and in the gospel.

Just as it was important for Israel to know that Moses and Aaron were Israelites, it was important that the world knows that Jesus was both Jewish and human. This same family is the family from which Jesus was born. The promises of God to Abraham, Isaac, Jacob and later David, all apply to Jesus. Jesus is the heir of the promises and the one who was promised. God promised an everlasting throne to David and it is fulfilled in Jesus. Whatever God’s purposes are for the promised land, these also will be fulfilled in Jesus.

Now, we will consider why it is important to know that Moses and Aaron were just normal men.

Like Abraham, Isaac and Jacob, we are all descendants of Adam. In Jesus’ family tree there were people from different cultures, nations and languages. There were people with dark skin and light skin. There were murderers and kings, harlots and queens. The gospel sees all humanity as one. Acts 17:26 says,
And he made from one man every nation of mankind to live on all the face of the earth, having determined allotted periods and the boundaries of their dwelling place, (Acts 17:26 ESV)

More important still is the fact that we are all represented by Adam, the father of our race called humanity. Romans 5 says:
Therefore, just as sin came into the world through one man, and death through sin, and so death spread to all men because all sinned— (Romans 5:12 ESV)

In Adam, we all sinned and are born sinners, slaves to sin. Then when we come into our own, we become slaves by choice, as the Scriptures say:
Jesus replied, “I tell you the truth, everyone who sins is a slave of sin.” (John 8:34 NLT)

This then is why it is important that Moses and Aaron and Jesus came from the line of ordinary people, that we might all be saved by the one man, Jesus Christ.

There is another reason it is important to understand that Moses and Aaron were just normal people. The Scriptures tell us:
Don’t you realize that those who do wrong will not inherit the Kingdom of God? Don’t fool yourselves. Those who indulge in sexual sin, or who worship idols, or commit adultery, or are male prostitutes, or practice homosexuality, or are thieves, or greedy people, or drunkards, or are abusive, or cheat people—none of these will inherit the Kingdom of God. Some of you were once like that. But you were cleansed; you were made holy; you were made right with God by calling on the name of the Lord Jesus Christ and by the Spirit of our God. (1 Corinthians 6:9-11 NLT)

Will you accept the call?