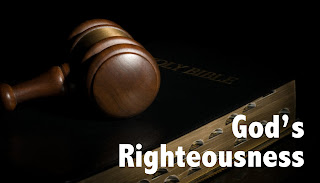 Faith is essential to the Christian life.  As we are the people of God, we partake of the righteousness of God by faith.  First, we are known for our faith.

Paul opens his letter to the Church in Rome with the necessary salutation, introducing himself as the author, the gospel as his subject and the Romans as his intended audience.  He then says, "First...”  He is excited to be writing to the Romans.  He says, "First, I thank my God through Jesus Christ for all of you, because your faith is proclaimed in all the world.”  (Romans 1:8, ESV)  He thanks God for people he has never met.

He expresses his great thankfulness to God because their faith was proclaimed in all the world.

Exceptional things are noticed throughout the whole world.  Of course, this does not mean literally the entire world, because Paul had no way of knowing what was happening in America.  However, traveling extensively in the Roman Empire, Paul had firsthand knowledge of how far word of the faith of the Roman Christians had spread.  The world notices true faith.  True faith causes people to behave in exceptional ways.

Paul commended the Thessalonian Church, saying in 1 Thessalonians 1:8, "...your faith in God has gone forth everywhere, so that we need not say anything."

Faith transforms us, and the difference is noticeable.  Word of the transformation spreads.  In the case of the Roman Christians, this was cause for great thankfulness on the part of the Apostle Paul.

What about our faith, yours and mine?  Is our faith cause for great thankfulness for our Lord Jesus Christ?

Jesus said:
For whoever is ashamed of me and of my words, of him will the Son of Man be ashamed when he comes in his glory and the glory of the Father and of the holy angels.  (Luke 9:26, ESV)

After expressing his great thankfulness, the Apostle Paul expresses his great longing.

His longing, like his gratitude, is linked to faith.  However, his longing is based on the encouragement he and they might be to each other's faith.  He says:
that is, that we may be mutually encouraged by each other’s faith, both yours and mine.  (Romans 1:12, ESV)

Paul expresses his desire to see them and to enjoy this mutual encouragement in the strongest terms.  He says that God is his witness how unceasingly he pleads for the chance to go to Rome.  Think of this in terms of what Paul has told us in other places about his life's purpose.  In Philippians 3:7-10, Paul expresses his pursuit in life.  He says:
But whatever gain I had, I counted as loss for the sake of Christ.  Indeed, I count everything as loss because of the surpassing worth of knowing Christ Jesus my Lord.  For his sake I have suffered the loss of all things and count them as rubbish, in order that I may gain Christ and be found in him, not having a righteousness of my own that comes from the law, but that which comes through faith in Christ, the righteousness from God that depends on faith— that I may know him and the power of his resurrection, and may share his sufferings, becoming like him in his death, (Philippians 3:7-10, ESV)

His longing to travel to Rome was tied to his longing to know Christ.  This longing showed itself in two separate but linked goals.  His first goal was to strengthen the believers in Rome by imparting some spiritual gift to them and the second was to reap some harvest among the Romans as he had among the rest of the Gentiles.

As an Apostle, Paul had a unique and special calling.  Therefore, he was uniquely obligated to strengthen and encourage believers and to preach to those who did not yet know the gospel.  This obligation is reflected in his words to the Romans expressing his strong desire to reap some harvest among them.

Later, when Paul actually arrived in Rome, he immediately called together a meeting of the local leaders of the Jews and began sharing the gospel with them (Acts 28:17ff).  After spending some time imprisoned in Rome, Paul wrote in his letter to the Philippians:
I want you to know, brothers, that what has happened to me has really served to advance the gospel, so that it has become known throughout the whole imperial guard and to all the rest that my imprisonment is for Christ.  (Philippians 1:12-13, ESV)

Paul's travels, whether as a prisoner or as a missionary, resulted in the strengthening of believers and in the advancement of the gospel among all peoples.  Sadly, there were those whose travels had the opposite effect.  Paul warns about them in his letters, describing them as enemies of the cross (For many, of whom I have often told you and now tell you even with tears, walk as enemies of the cross of Christ.  Philippians 3:18).

Do our travels result in the advancement of the gospel?

What is your great longing?  What passion shapes your life?

The Apostle Paul states plainly, "I am not ashamed."

This is the kind of shame that Paul is speaking of.  He is saying he is not ashamed, because the gospel is the power of God for salvation.

In his opening remarks, he stated what the gospel is.  It is the good news of Jesus Christ.  According to the flesh, he was born of the line of David, a Jew from the line of Judah.  He was shown to be the Son of God with power by His resurrection from the dead.  It is by believing in His name that we are saved.

It is important that we realize that we are not following cleverly devised fables when we state these things.  Peter stressed this when he says:
For we did not follow cleverly devised myths when we made known to you the power and coming of our Lord Jesus Christ, but we were eyewitnesses of his majesty.  (2 Peter 1:16, ESV)

Faith also results in confidence.  This does not mean a numbing of the mind.  Romans 1:17 tells us that in the gospel the righteousness of God is revealed from faith to faith.  This is a significant saying that is full of meaning.  One of the meanings that can be gleaned from this statement is that faith results in more faith.  James 1:3 tells us that the testing of our faith produces perseverance.  Part of this is because the testing of our faith strengthens our faith.  We find that our faith is reliable, that the truths we have built our lives around will not embarrass us.  We have no reason to be ashamed of the gospel.

In the gospel, the righteousness of God is revealed.

We are not justified by works of righteousness that we have done.  We are justified freely by grace through faith in our Lord Jesus Christ.  However, faith reveals itself in our right relationship to God.  James tells us that the devils believe in God and tremble, but obviously, they are not partakers in the righteousness of God.  The righteous person lives by faith, trusting in God so that his or her life results in praise to God, desire for God and confidence in God.

Faith and righteousness are tied together so that the righteous person’s life is one of faith from first to last.