The King of the Jews (Good Friday) 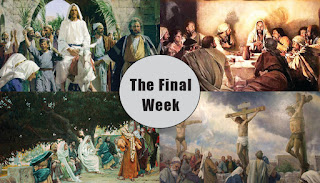 The final week of Jesus’ ministry among us came to a close with his arrest and trial.

While Jesus prayed, His closest friends fell asleep. He confronted them with these words:

Mark 14:41–42 (NKJV) 41Are you still sleeping and resting? It is enough! ﻿The hour has come; behold, the Son of Man is being betrayed into the hands of sinners. 42Rise, let us be going. See, My betrayer is at hand.

As He was still speaking, Judas approached with an armed crowd and made sure they found Jesus. His signal was the one he kissed.

Judas does not tell us, but Jeremiah 17:9 says:

Jeremiah 17:9 (NKJV) The heart is deceitful above all things, And desperately wicked; Who can know it?

The examination and trial that followed continued to demonstrate the truth of this Scripture. However, an underlying truth also comes to light. Jeremiah 17:10 says:

Jeremiah 17:10 (NKJV) I, the Lord, search the heart, I test the mind, Even to give every man according to his ways, According to the fruit of his doings.

Earlier in the night, Jesus said that one of those at the Passover meal with Him would betray Him, and then He said it would have better for that person if he had never been born. This is true of many of the people who participated in the trial that night.

After a night-time examination of Jesus at the High Priest’s house, All the Chief Priests and counsel members gathered for consultation early in the morning. Then they took Him to the Roman governor to ask for the death penalty. Pilate listened to the accusations against Jesus and found that He had done nothing worthy of death. But at the insistence of the Jews, he sent Jesus to be crucified. The crowd who had witnessed the miracles of Jesus also were shouting, “Crucify Him!” The soldiers mocked and made sport of the process of execution.

It would have been better for these people if they had never been born.

Mark tells us that after the trial, Jesus was hung on a cross. Mark 15:26 tells us:

Mark 15:26 (NKJV) And the inscription of His accusation was written above: THE KING OF THE JEWS

Pilate put his accusation on the cross to provoke the Jews who had insisted that an innocent man be crucified. They tried to get Pilate to change it, but Pilate insisted, “What I have written, I have written.” (John 19:22)

Jesus was alone on the cross, but He was not the only one being crucified. Two more were crucified on the same day. One hung on Jesus’ left and one on His right. Mark tells us:

Mark 15:27–28 (NKJV) 27With Him they also crucified two robbers, one on His right and the other on His left. 28So the Scripture was fulfilled which says, “And He was numbered with the transgressors.”

Some of your translations will not have verse 28, which says, “So the Scripture was fulfilled which says, ‘And He was numbered with the transgressors.’” Most likely, your Bible will have a note explaining that some manuscripts do not have this phrase. Either way, this saying is consistent with the rest of Scripture, and it is a quote from Isaiah 53:12.

The criminals on either side of Jesus remind us that Jesus was treated like a criminal. By their own admission, they deserved what they were getting, but Jesus was the sinless lamb of God. These circumstances show us the truth of 2 Corinthians 5:21.

2 Corinthians 5:21 (NKJV) For He made Him who knew no sin to be sin for us, that we might become the righteousness of God in Him.

The enemy was not content with the death of Jesus but was intent on heaping all the abuse, torture, and agony on Him that he possibly could.

Those who passed by insulted Him. Their words reveal that they knew of His ministry, but this did not keep them from blasphemy. Mark 15:29-30 tells us:

Mark 15:29–30 (NKJV) 29And those who passed by blasphemed Him, wagging their heads and saying, “Aha! You who destroy the temple and build it in three days, 30 save Yourself, and come down from the cross!”

Even the leaders of the people, the ones who put Him on trial, hurled abuse at Him.

Mark 15:31–32 (NKJV): 31Likewise the chief priests also, mocking among themselves with the scribes, said, “He saved others; Himself He cannot save. 32 Let the Christ, the King of Israel, descend now from the cross, that we may see and believe.”

Mark 15:32 tells us that even those who were crucified with Him joined in criticizing and insulting Him.

Jesus endured these insults. In Isaiah 50, it was prophesied of Jesus:

Isaiah 50:6 (ESV) I gave my back to those who strike, and my cheeks to those who pull out the beard; I hid not my face from disgrace and spitting.

Two essential questions were asked of Jesus during His trial. The first was by those who examined Him by night. In Mark 14:61-62, it says:

62Jesus said, “I am. And you will see the Son of Man sitting at the right hand of the Power, and coming with the clouds of heaven.”

This was the first crucial question. Who was Jesus? Who is Jesus? The truth is that He is the Son of God, and so, Jesus answered, “I am.” For this, the leaders condemned Him.

The majority of humanity rejects Him on these grounds. We would rather serve our gods of pleasure, money, and power. So, we reject His right to rule over us.

The second crucial claim was asked by Pilate. He asked Him,

Pilate used this as an opportunity to goad the leaders of the nation. Listen to what he asked them.

Pilate said, “...whom you call King of the Jews.” John says that Pilate asked them,

“King of the Jews” was written above Jesus for everyone to see. This was meant to provoke the leaders who had insisted upon the crucifixion, but ironically it was the truth. At His birth, the angel told Mary:

Luke 1:32–33 (NKJV) 32He will be great, and will be called the Son of the Highest; and the Lord God will give Him the throne of His father David. 33And He will reign over the house of Jacob forever, and of His kingdom there will be no end.

We are waiting for this to happen. He is king, but He is waiting.

Hebrews 10:12–13 (NKJV) 12But this Man, after He had offered one sacrifice for sins forever, sat down at the right hand of God, 13from that time waiting till His enemies are made His footstool.

As the Son of God, Jesus paid the price for our sins and bought our salvation. As the King of the Jews, He will return again and establish righteousness on earth. A day is coming when every knee will bow, and every tongue confess that Jesus is Lord.

People still insult and hurl abuse at Him, and if they do not repent, it would be better for them if they had not been born. However, Jesus invites whoever will to come to Him and be saved from sin and its consequences. Be sure you are not one of those who reject Him and insult the grace of God.