The Jews hated the Samaritans.

The feelings were mutual.

The Samaritans lived between Jerusalem, which was in Judea, and the region of Galilee in the north. 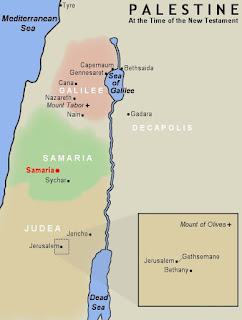 At the time of Jesus, the animosity between the Samaritans and the Jews dated back to the time of Jeroboam, when civil war tore the country in two.  At that time, Jeroboam set up golden calves to be worshipped in the northern kingdom.

2 Kings 17:21-24 says this about what happened to the northern kingdom of Israel:.
But Jeroboam drew Israel away from following the LORD and made them commit a great sin.  22And the people of Israel persisted in all the evil ways of Jeroboam.  They did not turn from these sins 23until the LORD finally swept them away from his presence, just as all his prophets had warned.  So Israel was exiled from their land to Assyria, where they remain to this day.

24The king of Assyria transported groups of people from Babylon, Cuthah, Avva, Hamath, and Sepharvaim and resettled them in the towns of Samaria, replacing the people of Israel.  They took possession of Samaria and lived in its towns.  25But since these foreign settlers did not worship the LORD when they first arrived, the LORD sent lions among them, which killed some of them.

26So a message was sent to the king of Assyria: “The people you have sent to live in the towns of Samaria do not know the religious customs of the God of the land.  He has sent lions among them to destroy them because they have not worshiped him correctly.”

27The king of Assyria then commanded, “Send one of the exiled priests back to Samaria.  Let him live there and teach the new residents the religious customs of the God of the land.”  28So one of the priests who had been exiled from Samaria returned to Bethel and taught the new residents how to worship the LORD.

29But these various groups of foreigners also continued to worship their own gods.  In town after town where they lived, they placed their idols at the pagan shrines that the people of Samaria had built.  30Those from Babylon worshiped idols of their god Succoth-benoth.  Those from Cuthah worshiped their god Nergal.  And those from Hamath worshiped Ashima.  31The Avvites worshiped their gods Nibhaz and Tartak.  And the people from Sepharvaim even burned their own children as sacrifices to their gods Adrammelech and Anammelech.

32These new residents worshiped the LORD, but they also appointed from among themselves all sorts of people as priests to offer sacrifices at their places of worship.  33And though they worshiped the LORD, they continued to follow their own gods according to the religious customs of the nations from which they came.  34And this is still going on today.  They continue to follow their former practices instead of truly worshiping the LORD and obeying the decrees, regulations, instructions, and commands he gave the descendants of Jacob, whose name he changed to Israel.[ii]

A couple hundred years after these events, these new residents of Samaria with their mixture of paganism and Judaism opposed Ezra and Nehemiah when they returned from the Babylonian exile to rebuild the temple and the city of Jerusalem.

They also taught their children that theirs was the true way to worship God.  Therefore, when Jesus met the woman of Samaria at the well, she said, “So tell me, why is it that you Jews insist that Jerusalem is the only place of worship, while we Samaritans claim it is here at Mount Gerizim, where our ancestors worshiped?”  (John 4:20, NLT)

Often, Jews would add 30 to 50 miles, or 1 to 2 days extra, to their trip to avoid Samaria by walking on the east side of the Jordan.   Jesus, himself, also followed this circuitous route on occasion.  However, in John 4, John tells us that Jesus had to go through Samaria.  (John 4:4)

Since Jesus and His disciples were baptizing in the Judean countryside, and the Pharisees had heard that Jesus was baptizing and making more disciples than John (John 4:1), it is likely that Jesus’s route was calculated to avoid the Pharisees as well as to get Him to Galilee.  By traveling directly from where He was, Jesus could avoid passing through Jerusalem and Jericho to get to the east side of the Jordan River.

Thus, John 4:6-7 finds Jesus sitting by Jacob’s well near the village of Sychar in Samaria.  When He asks the woman for a drink, she is surprised and says, “You are a Jew, and I am a Samaritan woman.  Why are you asking me for a drink?” (John 4:9, NLT)

Let me point out that every person you meet will have barriers to having any kind of a relationship with Jesus -- that is if they do not already have a relationship with Jesus.  Let them talk about the barriers.  Like the woman, they will know what the barriers are and will be happy to talk about them, if you are willing to listen.  Chances are you will be able to identify with them on some level.

Notice, Jesus does not present clever arguments, but He offers to her the gift that He has.

We cannot offer people anything we do not have.  Each person has his or her own story.  Each person meets Jesus at a different place on the road, and that story, your unique story, is your way to overcome barriers.  Where and how did you find living water?  Share what you have with those around you.

Having been offered living water, the woman eagerly accepts saying, “Please, sir, give me this water!” (John 4:15)

The discussion that follows is famous. After she tells him her story, Jesus tells her that she has spoken truthfully because she had had five husbands and she was not married to the one she was with.  (John 4:17-18)  In response, the woman brings up the age-old conflict between the Jews and the Samaritans regarding who was worshipping correctly.  Jesus answers it, and then brings her back to the truth that He is the living water.  He is the gift of God.

The real barrier in each of our hearts is never culture, race, history or anything from the outside.  The woman’s real barrier was not the fact that she was a Samaritan and Jesus was a Jew.  Neither was the fact that she was a woman and Jesus was a man the real barrier.  The barriers of culture and gender are real and must be dealt with.  However, every person will have to face the barriers in his or her heart in order to have a relationship with Jesus.

Notice how defensive the Samaritan woman was.  When Jesus points out her husband situation, she changes the subject.  Jesus does not say it is her fault.  Jesus makes no judgment.  He does not condemn her.  He just states the facts of her case, and then Jesus brings the discussion back to “I am the Messiah!”  (John 4:26)

The biggest barrier we all face in having a relationship with Jesus is our own brokenness.  It is hard to put a name to it.  Sin fits best.  It is a mixed bag.  We all have pride, shame, selfishness, greed, lust, envy and a host of other vices.  Therefore, it is easy to sum it all up with the word sin.  In addition, we are defensive about it.  We are even tempted to say we have no sin, even us believers.  However, 1 John 1:8 reminds us:
If we claim we have no sin, we are only fooling ourselves and not living in the truth.

We all have a history.

You and I also have a national history, a family history and a personal history.  All these things have the potential of being a barrier.  However, notice how Jesus deals with barriers.  He keeps coming back and saying in effect, “I am what you need.”   This was His message.  “I am the way, the truth, and the life.”  (John 14:6)

The Samaritan woman had barriers to ever having a relationship with Christ.  She was a Samaritan.  She was a divorcee.  She was living in an adulterous relationship.  However, Jesus did not condemn her.  He offered her himself.

If others have condemned you and turned you away, Jesus will not, even knowing, as the woman said, “everything I ever did.”  (John 4:29)

Come today and drink deeply from the fountain of salvation!  (Isaiah 12:3)