The Source of Life

The God of the Hebrews, the Lord, sent Moses and Aaron to Pharaoh with a message: “Let my people go!” He gave signs for Moses and Aaron to perform before Pharaoh. In Exodus 7:1-13, Moses recounts the challenge of the staffs, where God demonstrated that His power was greater than Pharaoh’s.

However, Pharaoh’s heart grew hard. Exodus 7:13 says:
Still Pharaoh's heart was hardened, and he would not listen to them, as the Lord had said. (Exodus 7:13 ESV)

The God of the Hebrews is the God who created the Egyptians, whether or not they acknowledged it. For this reason, Pharaoh’s hardened heart was a severe problem. What we are going to see today is that his hardened heart cut him off from the source of life.

Hebrews chapter 3 warns us several times about having hardened hearts. Hebrews 3:13 tells us:
But exhort one another every day, as long as it is called "today," that none of you may be hardened by the deceitfulness of sin. (Hebrews 3:13 ESV)

We see an example of the deceitfulness of sin and of hardened hearts in the confrontation between God and Pharaoh. Every human heart is a Pharaoh with its own “Egypt” to rule and a Nile River running through it.

Exodus 7:15 says:
Go to Pharaoh in the morning, as he is going out to the water. Stand on the bank of the Nile to meet him, and take in your hand the staff that turned into a serpent. (Exodus 7:15 ESV)

Our account starts with Pharaoh going to the water in the morning.

The Nile, the water that Pharaoh was going to, was the source of life for Egypt. One of the many gods worshiped by the Egyptians was named “Hapi.” He was the god of the annual flooding of the Nile. Wikipedia says this about Hapi:
The yearly flooding of the Nile occasionally was said to be the Arrival of Hapi. Since this flooding provided fertile soil in an area that was otherwise desert, Hapi, as its patron, symbolised fertility. He had large female breasts because he was said to bring a rich and nourishing harvest. Due to his fertile nature he was sometimes considered the "father of the gods", and was considered to be a caring father who helped to maintain the balance of the cosmos.[1]

The flooding of the Nile was essential to Egyptian prosperity. They built “Nilometers” at locations along the river to determine the extent of the annual flooding and used the measurements to help determine taxes and predict the harvest. 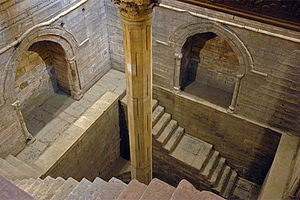 An ancient “Nilometer” built to measure the annual flooding of the Nile.[2]

When something is important to us, we track and measure it. The Nile was important to the Egyptians. It was the source of life to them.

Pharaoh is getting to know the Lord in an adversarial way because he has set himself in opposition to the Lord. It started with the fear of loss in chapter one of Exodus when the Egyptians realized the economic force the Hebrews had become. They enslaved the Hebrews for economic gain and their advancement. Now, consider what was about to happen. Exodus 7:17-18 says:
Thus says the Lord, "By this you shall know that I am the Lord: behold, with the staff that is in my hand I will strike the water that is in the Nile, and it shall turn into blood. The fish in the Nile shall die, and the Nile will stink, and the Egyptians will grow weary of drinking water from the Nile." (Exodus 7:17-18 ESV)

Two things essential for life are about to be touched, water and food. The Egyptians ate fish from the Nile. When the Hebrews complained they wanted to go back to Egypt, one of the things they remembered was eating fish. (Numbers 11:5) Now, the fish were about to die, and the water was to become blood. Food and water are essential for physical life. Water is absolutely necessary. Therefore, even when the river is blood, the Egyptians will be forced to drink it. Exodus 7:19 tells us that even the water in vessels of wood and stone was turned into blood.

In his refusal to let the people of Israel go, Pharaoh was protecting what was important to him. He valued prosperity, power and his kingdom. He was the ruler and god of his kingdom, Egypt, and he refused to acknowledge the authority of the Lord (Yahweh) over him or his kingdom.

Pharaoh thought the source of his life was nature, found in the Nile River, and economics, found in the labor of the slaves and the food and goods they produced. Beyond these he acknowledged no force greater than himself.

Pharaoh’s heart remained hardened.  Consider Exodus 7:21-23.
And the fish in the Nile died, and the Nile stank, so that the Egyptians could not drink water from the Nile. There was blood throughout all the land of Egypt. But the magicians of Egypt did the same by their secret arts. So Pharaoh's heart remained hardened, and he would not listen to them, as the Lord had said. Pharaoh turned and went into his house, and he did not take even this to heart. (Exodus 7:21-23 ESV)

Since his magicians were able to reproduce the same by their secret arts, Pharaoh’s heart remained hardened. They could not lift the plague and turn the blood back into water. They could not restore life and prosperity. They could not remove the death and bring back the fish. They were deceived into thinking they had some power because they turned water into blood.

What good did their power do them? Were they really connected to the source of life?

Jesus asks us a question.
For what does it profit a man to gain the whole world and forfeit his soul? For what can a man give in return for his soul? (Mark 8:36-37 ESV)

Pharaoh did not understand the source of life. Nature, abundance, food and water are not life. In Pharaoh’s case, blood, which is our life, became a source of death to him.

Jesus told us:
For whoever would save his life will lose it, but whoever loses his life for my sake and the gospel's will save it. (Mark 8:35 ESV)

This runs contrary to our thinking and our nature. By nature, we hold on to what we perceive as being the source of our life. Pharaoh thought Egypt was his life. It was his kingdom.

This natural thinking is the source of idolatry, having a god other than the one true God, the Lord (Yahweh). It was the source of all the idolatry of Egypt and it was at this issue that God aimed the plagues.

God will do the same in each person’s life. The Nile running through your life is what you perceive to be the source of your life. You are the Pharaoh of your own Egypt. Will you submit to God?

John tells us this about Jesus:
In him was life, and the life was the light of men. (John 1:4 ESV)

Jesus is the true source of life. Only in Him is life to be found.

God was giving Pharaoh a chance. He told Pharaoh:
“By this you shall know that I am the Lord...” (Exodus 7:17)

He was giving Pharaoh a chance to know the true source of life.

He is giving each of us the same chance. He calls us to Himself and says:
"If anyone thirsts, let him come to me and drink. Whoever believes in me, as the Scripture has said, 'Out of his heart will flow rivers of living water.'" (John 7:37-38 ESV)